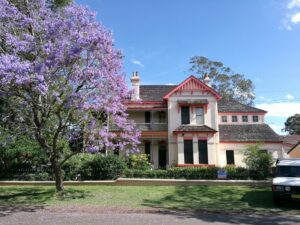 Situated at the corner of Putland Street and Pages Road, St, Marys, the two-storied house Mimosa stands today as one of the most elegant and historic houses of the area. The house was originally built for St Marys tannery owner and businessman, Andrew Thompson.

Completed in 1894, it was designed and built by local building contractor Joseph Sainsbury. According to a report in the Nepean Times newspaper at the time of its completion, Mimosa was considered to be “without a doubt, the costliest building in the Nepean district”. The building created considerable interest at the time, the local newspaper making frequent references to its progress. Finally, in the first issue of 1895, the Nepean Times reported that the Thompson family has shifted into their new home. The house was at first lit by acetylene gas, chosen by Andrew Thompson in preference to electricity as being the most economic. Some of the original gas fittings still remain a feature of its beautiful restored house. This fine example of late-Victorian architecture was classified by the National Trust in October, 1980.

To make a donation, please visit our Donations Page.